Good whatever time of day it is where you are!

I am a Russian-of-almost-30 who has been living in São Paulo (Brazil) over the last 3 and a half years. My attempts to integrate into the local environment are of varying success, and so is the study of a new language. I came here with no money on my poker account and (how ironic it might be) with no job other than poker.

Now, for the first time in my life, I make a living playing poker, and earn more then routinely spend though Sao is not the cheapest city to reside. So, I decided to bring something to the poker community. It is supposed to be a three-language (English, Portuguese and Russian) blog, and it is the first time I am making notes in a foreign language, so, please, don’t judge me too harshly.

Well, it is supposed to be a blog of an ordinary asocial person from a little out-of-the-way place who wanted to become the smartest, but failed.

Now, few words about my humble self. I was born and grown in a closed administrative-territorial formation (according to Wikipedia) in Western Siberia (about 3000 miles from Moscow) with the population of 120 thousand. My family was poor, but we never starved. My mother is a teacher (in Russia this job is far from being well-paid), my father is an Oracle database manager (though he could have found a place with a reasonably good salary, he always preferred legal local job to provide a pension). I have three sisters, one of them is one year older than me, she lives in Moscow; she is a Ph.D. in Art History (Music, to be more specific). My second sister is 7 years younger than me, she works as a school teacher in my native town (together with my mum). And the last of my sisters studies at Moscow State University, Faculty of Mechanics and Mathematics.

I started school when I was about 5 (**) and have been taking courses together with my elder sister. My mother has been working at that same school, and that, actually, had affected all my schooldays. I was a typical nerd, I loved maths. Other courses didn’t seem important to me, and I never hesitated to show it. So, I graduated from Faculty of Mechanics and Mathematics in neighboring city.

At the same time I’ve finished an Art School specializing in Violin.

I have been switching jobs frequently, 5 places (and about 14, informally) in 5 years, have started two Ph.D. programs, but never completed any of them.

Being an introvert I try to fight all the extreme manifestations of such temper. I have liberal views on most aspects of life.

This might sound like a school-kid-essay thing, but, anyway, my leisure activities are: cycling, soccer, horse riding and I usually go to listen to my favorite musicians (both at nightclubs and fests) or to see the show of some bands that are new to me.

I am planning to post stories that happened (to me or not to me) or just some stuff that seems important, to make notes about things that really catch my attention. As the matter of self-control, I’ll try to include some stories where I was not the one to play a positive role. As I am totally ignorant in the matters of visual taste, my friend artist agreed to help with some illustrations.

It would be interesting to consider some examples of cultural differences between the countries, that is why all the comments and questions about Russians’ behavior (whether atypical or strange) in various situations are always welcome. 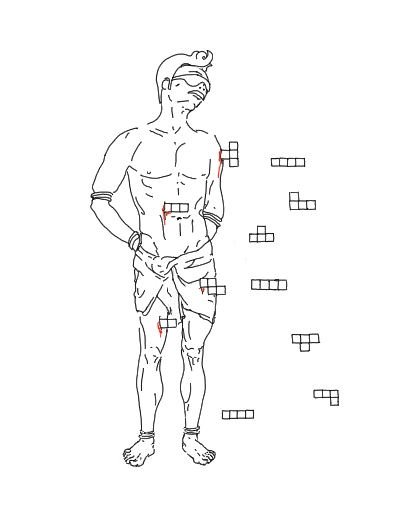 I don’t want to discuss poker questions in this blog, such as strategy, limits, hands. But I am ready and open to discuss all near-poker stuff, like discipline, player’s life, ethics, etc.

Since I have no idea of how to justify mentioning the direct participants of events apart from not using their true names, I claim all stories and characters being fictional (which is true, actually, since the reality has already passed through the prism of my mind) and not to have much in common with what really happened.

* – a closed area in Russia where they keep strange objects and make nuclear weapons.

** – in Russia suggested age to start school is 7.